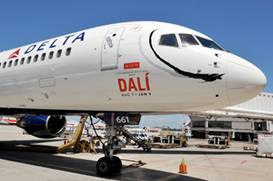 In celebration of the High’s new exhibition, “Dalí: The Late Work,” Delta has decked out a 757 plane with a Salvador Dalí-esque mustache. The plane, which went into service today, will fly domestically. The High invites travelers who spot or ride on the plane to share their experience on the museum’s Facebook page (facebook.com/highmuseumofart) and on Twitter (twitter.com/highmuseumofart). Delta Air Lines is the Official Airline of the High Museum of Art.

“Dalí: The Late Work,” the first major exhibition to reevaluate the last half of Salvador Dalí’s career, will be presented exclusively at the High Museum of Art. Beginning in the late 1930s, Dalí went through a radical change in which he embraced Catholicism, developed the concept of nuclear mysticism and, in effect, reinvented himself as an artist. Comprising more than 115 works, including paintings, drawings, prints and other Dalí ephemera, the exhibition will also explore the artist’s enduring fascination with science, optical effects and illusionism as well as his connections to such artists of the 1960s and 1970s as Andy Warhol, Roy Lichtenstein and Willem de Kooning.

Among the highlights of the exhibition will be several works that have not been seen in the U.S. in 50 years, including the monumental “Christ of St. John of the Cross,” which was voted Scotland’s favorite painting in 2007, and “Santiago El Grande,” which has not left New Brunswick, Canada, since 1959. Designed as an altarpiece, this painting includes Dalí’s vision of the Crucifixion, an homage to Saint James (the patron saint of Spain) and an atomic explosion. The exhibition will also feature “Assumpta Corpuscularia Lapislazulina,” from a private collection in Spain, which has not been seen publicly since 1959.

“Salvador Dalí: The Late Work” is organized by the High Museum of Art in collaboration with the Salvador Dalí Museum, St. Petersburg, Florida, and the Fundació Gala-Salvador Dalí, Figueres, Spain. Support is provided by Official Airline Partner: Delta Air Lines; Art Partners, The Fay and Barrett Howell Exhibition Fund and The Forward Arts Foundation Exhibition Endowment and indemnity from the Federal Council on the Arts and the Humanities and will be accompanied by a fully illustrated catalogue to be published by the High Museum of Art.
Posted by Georgia Front Page.com at 9:21 PM

If you would like to see your arts events included in Arts Across Georgia please add news@artsacrossga.com to your media press release distribution lists.

Promote Your Page Too

Promote Your Page Too